The Ikameka custom biomorph was crafted in the 2% Earth gravity of Vat City in the Beehive warrens of Extropia (44 Nysa). This incredibly specialized sleeve is rumored to incorporate illegal exogenetic material from a Black-Ops GateCrashing event however this is likely untrue since no security warnings have arisen as a result of any scans of this morph so far.

It’s design is wholly the work of legendary retired FireWall sentinel Leona Ikameka. An Argonaut GateCrasher post-humanist brinker with a fortune in patented inner system intellectual properties and transitional and new economy reputation enough for a small hypercorp. Her biosystems genius made possible the survival of some habitats during the early years after the fall, gaining her Carte Blanche access to resources, fabs, makers and all scales of manufacturing. Respected by open minded scientific peers among the Argonaut movement she prospered despite inner-system and bioconservative uproar due to her post-humanist activism and persistent insistence of the reality of the Watts-McLeod Async strain of the exsurgent virus and defense of it’s safety to transhumanity.

She retired to obscurity in about AF 08. Last having been seen among the colonies of Saturn.

The Ikameka morph, of which only three are known to exist today ( Two others having been lost in FireWall actions in the Outer Rim and on an unspecified Exo-planet whose location is still classified but rumored to be an oft-visited exo-colony. ) posesses features of several different biomorph sleeves including the Hyperbright successor to the Menton and to some peoples distaste, the Lost Generation’s Futura morph. It is unknown why genetic sequences from the Futura were carefully and specifically integrated to anyone but Leona. 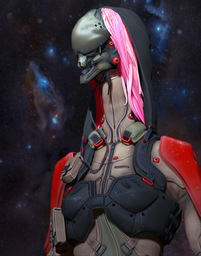