The KR-91N “Nighthound” Trans-Atmospheric Gunship / Troop Transport is a Small Lander and Orbit Transfer Vehicle (SLOTV): This vehicle is identical in use and design to the LLOTV, except that it is one third the total mass and correspondingly less expensive to build and refuel. Some exceptionally wealthy individuals own private small LOTVs. Using a small LOTV with a hydrogenoxygen engine to take off and land on Venus or for other high velocity uses is exceptionally cramped and allows for absolutely no room for error. Like the LLOTV, this vehicle can be easily converted between low and high velocity configurations and is made in both streamlined and non-streamlined versions.

The KR-91N “Nighthound” Trans-Atmospheric Gunship / Troop Transport is used for transporting troops and Battlesuits between a planet or moon and orbit and for short distance transfers between habitats less than 100,000 km apart. It features smart material landing legs and grapples so that it can rest securely on any stable terrain and link up with all forms of docking clamps for rapid troop deployment / insertion. It comes in variants designed to use either a hydrogen-oxygen chemical rocket or a metallic hydrogen rocket. The use of light-weight smart materials allows the interior to be easily and rapidly reconfigured to accommodate different amounts of fuel, passenger seats, and cargo space. The Nighthound is designed for planetary landing and comes in two configurations: high or low velocity. High velocity configuration allows the vehicle to land and take off again on Venus or Earth without refueling and for rapid transport between nearby habitats. Low velocity configuration is designed to land and take off again on Mars or various large moons without refueling and for slower and more fuel efficient transport between nearby habitats. The extensive use of smart materials in this vehicle means that the Nighthound can use metallic hydrogen engines that can be easily converted between the high and low velocity configurations, requiring less than a day in a well-equipped maintenance facility. However, vessels using hydrogen oxygen engines cannot be converted. Since metallic hydrogen is a much more efficient propellant, landers using it always include significant amounts of extra propellant for emergencies. 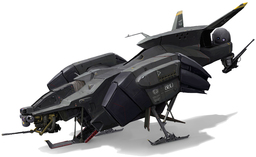